The demonstrator lineup for 2023 will be announced in early 2023

Spend a Weekend or a day at Ashokan that will enlighten you on the history, development, and  creation of high quality blades.

The Speakers for the 2022 Knife Seminar 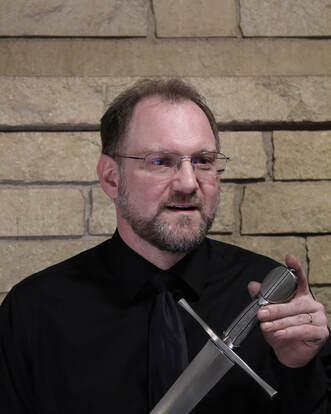 Biography:
With a lifetime devoted to the research and study of the history, science and methods of forged blades, Kevin Cashen is one of the most respected experts in his field on many aspects of his craft.  Because of this, his services as an instructor are much in demand.  Kevin has been an American Bladesmith Society approved instructor for over 20 years, and has taught classes ranging from intro to bladesmithing, for beginners, to blade metallurgy, for master instructors, at locations that include local events, international symposiums and colleges and universities. He has been integral in helping to organize and lead programs for the Ashokan Knife Seminars for many years and will be lending his expertise to this year's sword program. View Kevin's work at https://cashenblades.com/the-blades/
Demo:
Besides being the primary host of this year's seminar, Kevin will be leading a few demos. ​"In “The Kukri” I will be talking about traditional Khukuris, their history, construction, and my methods of making them.  In “Diffusion- The Processes of Adding, or Losing Carbon in Steel”  I will be talking about various methods of carburizing iron, the possible ways to lose carbon from blades and the material science of how carbon behaves in steel."
Khukuris by Kevin Cashen 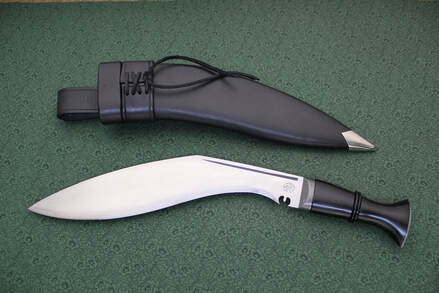 David Barnhill
Biography:
David Barnhill, Malone WI, b. 1976 began studying mokume in 1999 as a college research project. After graduating from his undergraduate program in metalsmithing from the University of Wisconsin Oshkosh he continued to research better ways of fusing different combinations of metals. In 2006, fellow mokume artist Steve Midgett allowed David to visit his studio in North Carolina. While at Steve's studio David was able to discuss some of his mokume theories with Steve and in 2007 David began researching solid state diffusion bonding. In 2009, upon graduating with his Master of Fine Arts Degree from Edinboro University of Pennsylvania, David began the Mokume Layered Resplendence series with fellow artist David Huang. David Barnhill continues to experiment with different ways to fuse mokume, lecture throughout the US, and his work has been shown throughout the United States in museums, art galleries and universities.

​Links: www.davidabarnhill.com
Instagram: @pyroprometheus
​
Description of Lecture:
David Barnhill is a metalsmith with 24+ years of experience creating mokume. The lecture will discuss what is mokume, the history of mokume and how it survived until modern times, different fusing techniques with pros and cons, the metallurgy associated with fusing various metals - using liquid phase, solid state, and beyond... as well as showcase different areas that David Barnhill is continuing to experiment with mokume- pushing the process into the future.

Description of Demo:
Often it is assumed that mokume is an incredibly difficult process because metals don't often like to fuse, but this isn't always the case. David Barnhill will demonstrate how to properly clean and fuse a simple billet (block of laminated metal) of fine silver and copper which can later be carved and manipulated into a sheet of mokume for fabrication. David will also be showing many examples of mokume as well as speaking about different processes used for fusing and patterning. The takeaway should be that once the mokume is properly fused the material can be fabricated into anything: vessels, bolsters, boxes, etc
A few examples of David's work: 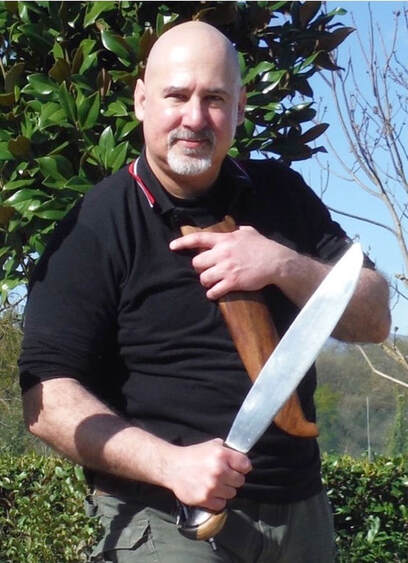 Bill McGrath
Biography:
Bill McGrath started his training in the Pekiti-Tirsia system of Filipino martial arts in 1975 at the age of 14 and continues to this day. He has a 30 year career in law enforcement, where he served as a defensive tactics and firearms instructor for his dept.
Bill’s website: https://pekiti.com/
Bill’s knife blog: https://pekiti.com/blogs/news/tagged/knife-training
Bill’s YouTube channel: https://www.youtube.com/user/TuhonBillMcg/videos

Demo:
The pros and cons of a tactical tomahawk, a kukri and a bowie knife as a weapon.
Each tool has its strengths and weaknesses. Each also has a particular style of use.

I tell my Pekiti-Tirsia FMA students that just because you have training in techniques designed for a straight blade, does not mean you can transfer all those techniques automatically to all other edged weapons. It will take some adjustment, as I discuss briefly in this lecture

When asked which I would take into a survival situation, I usually reply “That depends what I am trying to survive.”

If I was trying to move through or around obstacles in an urban environment, then I would want an all steel tactical tomahawk. (The CRKT Kangee T-Hawk is what I keep in my car emergency bag.)

If I was trying to survive in the wilderness, then the kukri gives you many of the functions of both a hatchet and a machete. Conversely, if I needed a melee weapon, (such as trying to escape a riot, where I have time for only one cut per opponent), then the kukri hits harder than the bowie knives I own, while being far less likely than one of my tomahawks to get stuck in a target. I own a Ontario OKC kukri, as it’s a great camping tool, but would prefer the Cold Steel Gurkha Kukri Plus, if in the riot scenario I spoke of.

If I was trying to survive a knife fight against a well trained, single opponent, (and was limited to the three choices given here), then I would choose a bowie knife because of its maneuverability and its better thrusting ability than the other two weapons.
Now, which weapon would you choose? 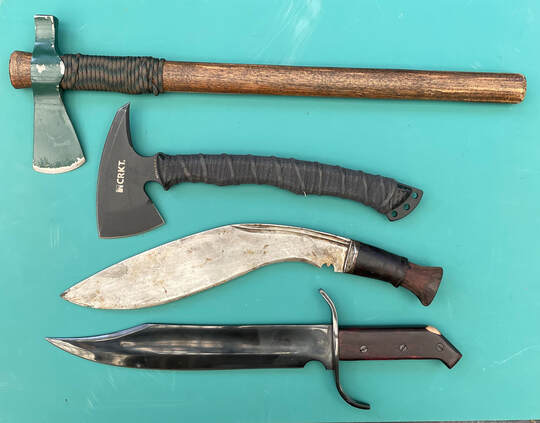 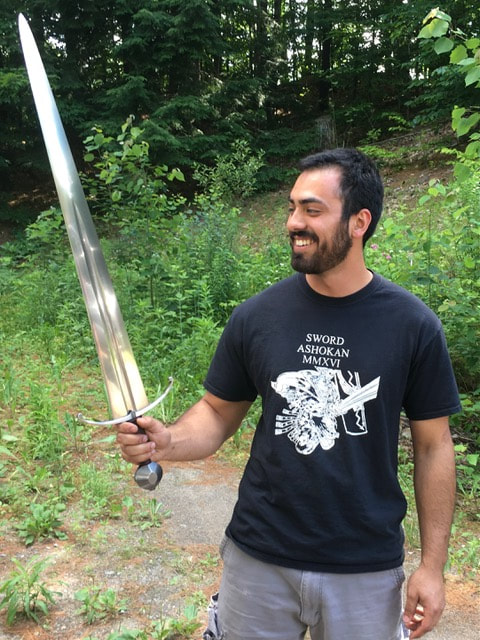 Emiliano Carrillo
Biography:
Emiliano Carrillo began bladesmithing in 2014 at Hampshire College where he quickly became enamored with Viking Age pattern welding and Japanese swordsmithing. Emiliano focused on historical pattern welding techniques and using artifacts to reverse engineer the forging techniques used on those pieces. He’s had the opportunity to study many original artifacts in museums as well as private collections and this study influences every aspect of his work. Emiliano began making bloomery iron and steel fairly early on in his career in order to better understand the ancient work. He currently creates Japanese style pieces out of his own smelted sand iron tamahagane and oroshigane as well as Viking spears, swords, and seaxes from the same period accurate materials.
Demo:
Emiliano’s demonstration will be based on creating hamon in modern steel as well as oroshigane and his lecture will be a slideshow and lecture on the finer points of polishing for hamon.

You can see some of Emiliano’s work at emilianocarrillo.com or facebook and Instagram at Sun and Stars Forge
Examples of Emiliano's work 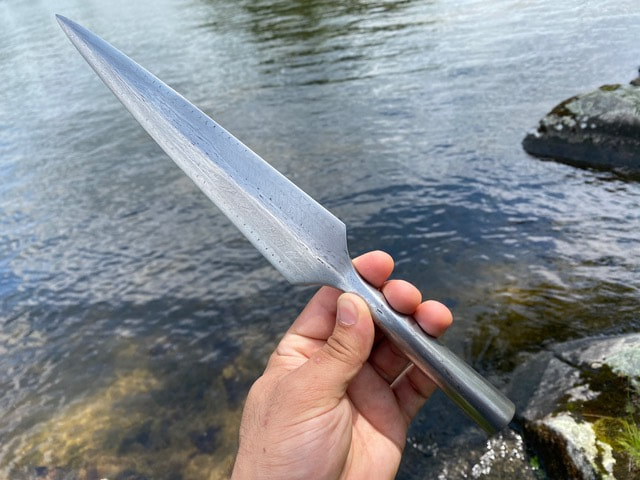 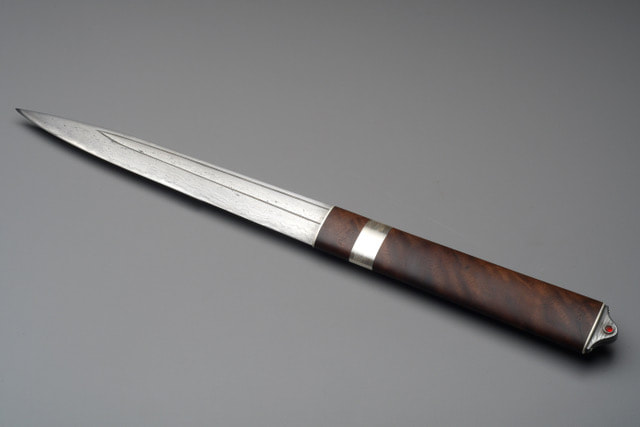 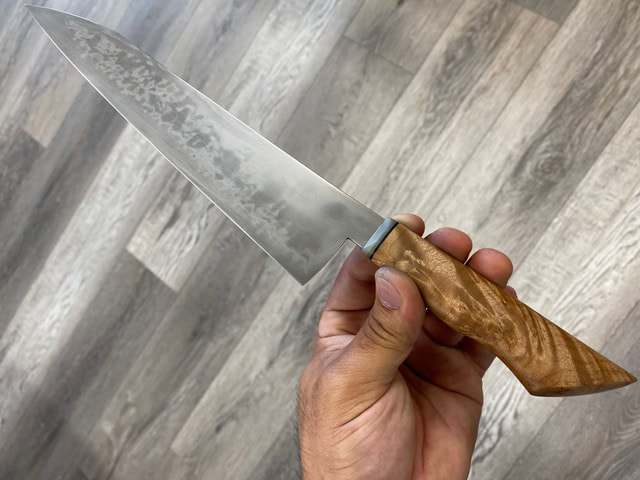 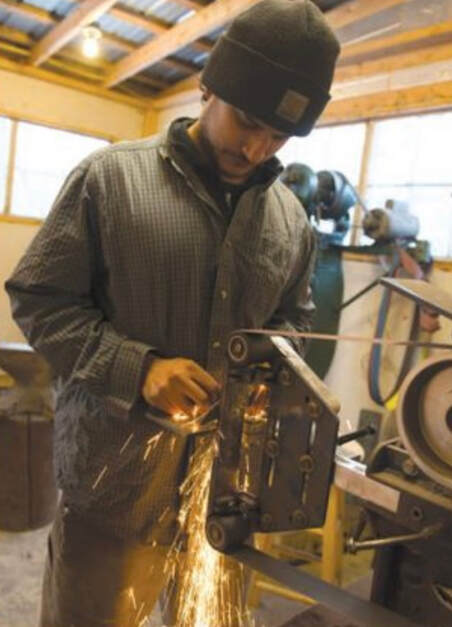 Ben Breda
Biography:
Ben Breda is an ABS Journeyman smith from Hope, Maine. He began making knives in 2012, and earned his J.S. stamp in 2014. He builds beautiful and functional knives using only the highest quality materials. All his blades are hand forged from high carbon steels and Damascus. Ben has a real passion for knife making.  He puts in a lot of hours into each knife he crafts, and takes great pride in the finished product.  He is definitely one of the “up-and-coming” new smiths in the ABS
Lecture:
Knife Design and Construction- In this lecture the different styles of basic knife construction will be covered. Both Hidden tang and full tang handle construction, different handle and guard shapes, and how to plan your work, and work your plan for any knife build
Demo:
Basic grinding - this demo will cover the different styles of basic grinding as well as covering Ben's own style that he uses everyday in his shop. How to hold the blade properly while grinding, grit progression, detail/finish grinding, and other tips and tricks, are a few of the things that will be included in the demonstration as well as answering any questions the students might have.

Examples of blades by Ben Breda 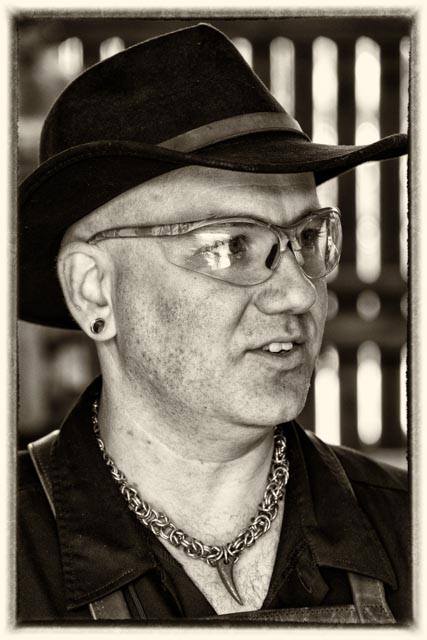 Rob "Deker" Dekelbaum
Biography:
Rob "Deker" Dekelbaum is a computer security nerd who began his blacksmithing/bladesmithing journey about 15 years ago. After some relatively humble beginnings, Deker found a love for the science of metallurgy and heat treatment, the process of making Damascus, and tools...lots of tools. Over the past several years, he has specifically started to specialize in large format Damascus work, and is currently working on a project creating pattern welded steel being used to produce a limited edition of 100 1911 pistols, all of which contain a small bit of steel from the World Trade Center towers that is to commemorate those lost in, and after, the events of 9/11/2001.

Demo:
Deker will be giving an introductory demonstration on making Damascus. Specifically, he will be addressing some of the challenges that beginners face as they step into this work. He hopes to demystify the process a bit and give folks getting started some scientific basis for what happens when you forge weld, and clarify some common misconceptions about forge welding and pattern welding.

Deker will be giving an introductory demonstration on making Damascus. Specifically, he will be addressing some of the challenges that beginners face as they step into this work. He hopes to demystify the process a bit and give folks getting started some scientific basis for what happens when you forge weld, and clarify some common misconceptions about forge welding and pattern welding.
Pattern welded blade by Deker Jonathan Nedbor
Biography:
A full #me metalsmith since 1971, first as a jeweler, then welding, and in 1973
discovered blacksmithing. I produce a wide variety of work in my shop with a focus
on hardware as well as fireplace equipment, furniture, tool making and
architectural work. A major focus of my ironwork is researching and reproducing
the historic ironwork found in the Hudson Valley of New York.
Demo:
Jonathan will demonstrate the basics of hand forging ironwork in a coal re and at
the anvil with forge welding, hot splitng and more. The approach used is simple,
straight forward and will provide insight into moving and shaping steel.
Thumb latch by Jonathan Nedbor​ 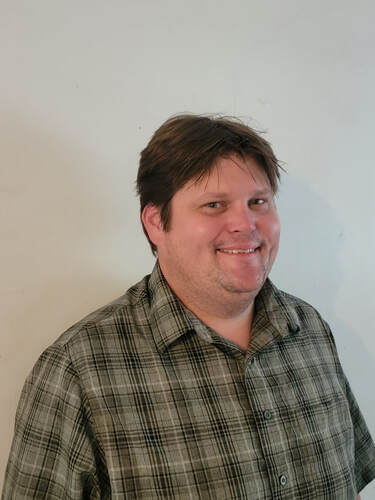 Herb Kettle
Biography:​
I started making knives as a teenager.  I made my first journey to Ashokan for the 1995 Sword year and I've only missed handful of years since. I've been a spare time maker while pursuing a career as a structural and pipe welder for a DOD contractor.  I've helped teach classes and volunteered with youth forging programs at nearby New England School of Metalwork.
Demo:
Green coal is an opportunity for folks of all experience levels to forge a blade hands on.  The focus will be on basic blade shapes, forging technique and sequence, along with basic blacksmithing fundamentals. Use and care of a coal forge fire will be covered as well. Blade steel will be available for purchase on site. 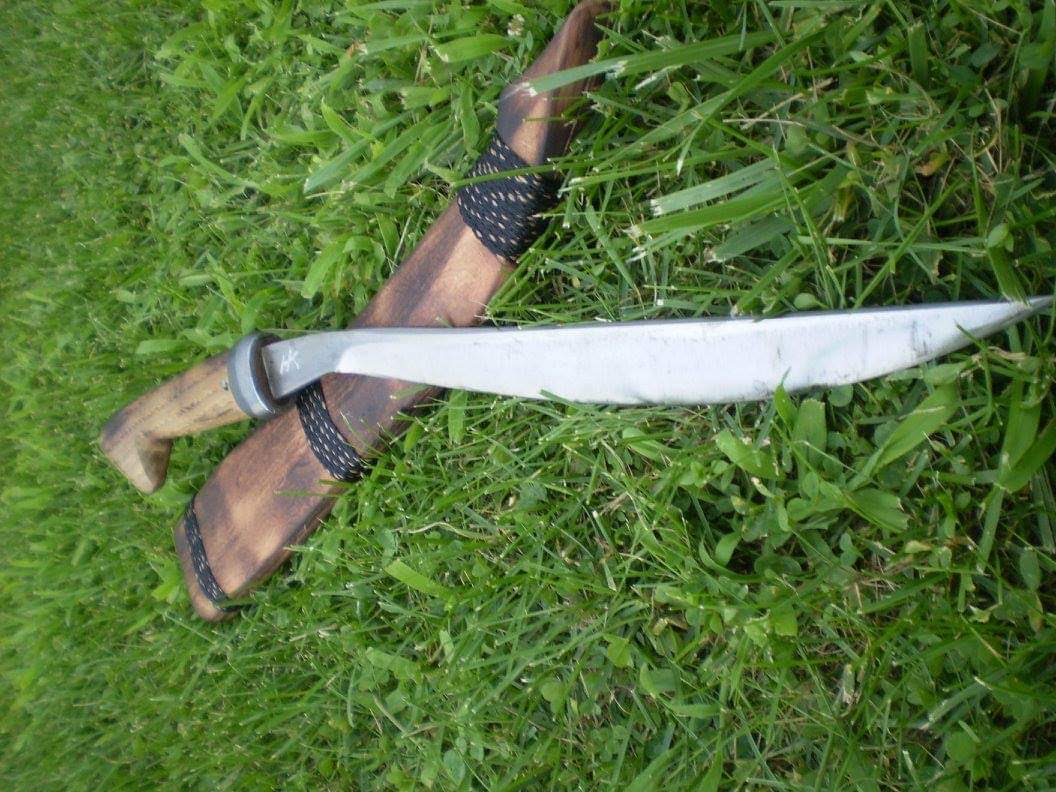 Learn From the Best!